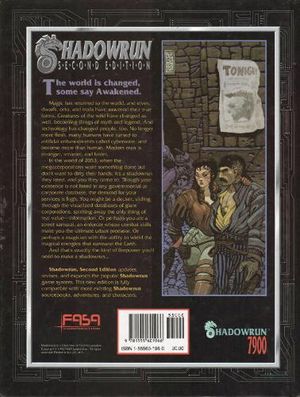 The world has changed, some say awakened.

Magic has returned to the world, and elves, dwarfs, orks and trolls assumed their true forms. Creatures of the wild have changed as well becoming things of myth and legend. And technology has changed too. No longer mere flesh, humans have turned to artificial enhancements called cyberware, and become more than human. Modern man is stronger, smarter, and faster.

In the world of 2053, when the megacorporations want something done but don't want to get their hands dirty, it's a shadowrun they need, and you they come to. Though your existence is not listed in any government or corporate database, the demand for your services is high.